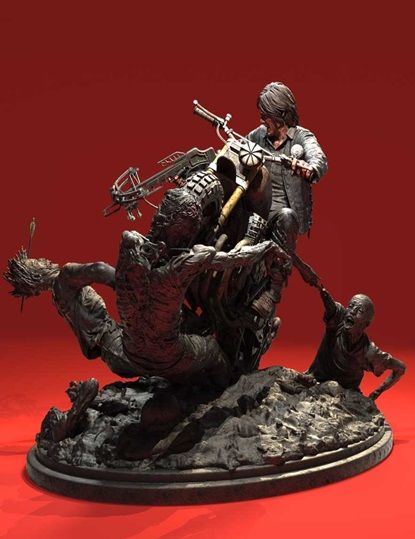 Daryl Dixon is a skilled hunter, fighter, tracker, and mechanic whose talents have made him one of the most valuable individuals to the group, and have saved him and his companions on many occasions. This statue embodies the intensity of Daryl Dixon as an individual using everything to his disposal, even his motorcycle, to fight and survive. Not only has his savvy for staying alive meant a chance to fight another day, but also made him an instant fan favorite on AMC’s hit television series The Walking Dead. With acute attention to every detail from head to tail pipe, the Daryl Dixon resin statue was created, developed, and designed by Todd McFarlane, and his award-winning McFarlane Toys design group, in conjunction with AMC. A welcomed addition to McFarlane Toys line of limited addition resin statues, Daryl Dixon comes as the first statue featuring AMC’s The Walking Dead. PRODUCT DETAILS: Cold-cast Limited Edition Resin Statue. Individually and sequentially numbered. Stands over 10 inches tall and over 14 inches wide. Features magnetic pieces for easy assembly. Certificate of authenticity hand-signed by Todd McFarlane. Features Daryl Dixon on his new Motorcycle first seen in season 5. Contains seven Walkers on resin base. Includes alternate Head wearing Sun Glasses.