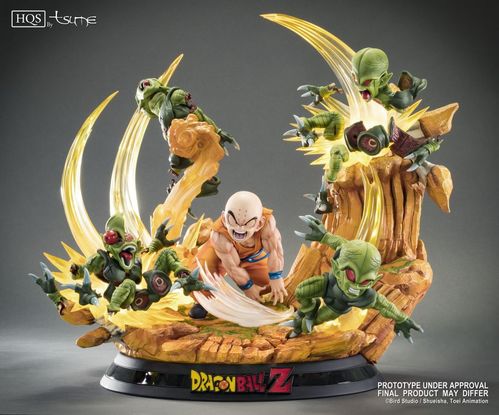 Krillin is finally in the spotlight!

TSUME is adapting the best friend of Son Goku at the scale 1/6 in the form of an incredible diorama.

Usually quite reserved and calm , Krillin loses his temper when Yamcha dies in front of his eyes. He then unleashes a devastating attack that kills in one fell swoop three of the six Saibaimen who were attacking his friends. It's a cult moment and one of a few that shows how powerful this character is. This is the reason why we wanted to adapt this scene into a statue, even if it meant going back a little bit in the chronology of our statues of the Dragon Ball Z series. The sculpture is all about dynamism, centered on Krillin, while the monsters explode in pieces around him. Each wave of light is enhanced by a system of LEDs and small details such as the Saibaimen that stumbles off the base, or the eye that comes out of its orbit, make this scene quite realistic. The coloring is consistent with the previous statues of the series, with a dominant of ocher and orange hues on the base and Krillin, while contrasting with the green colors of the Saibaimen.

The statue comes with a numbered plate and a certificate of authenticity.